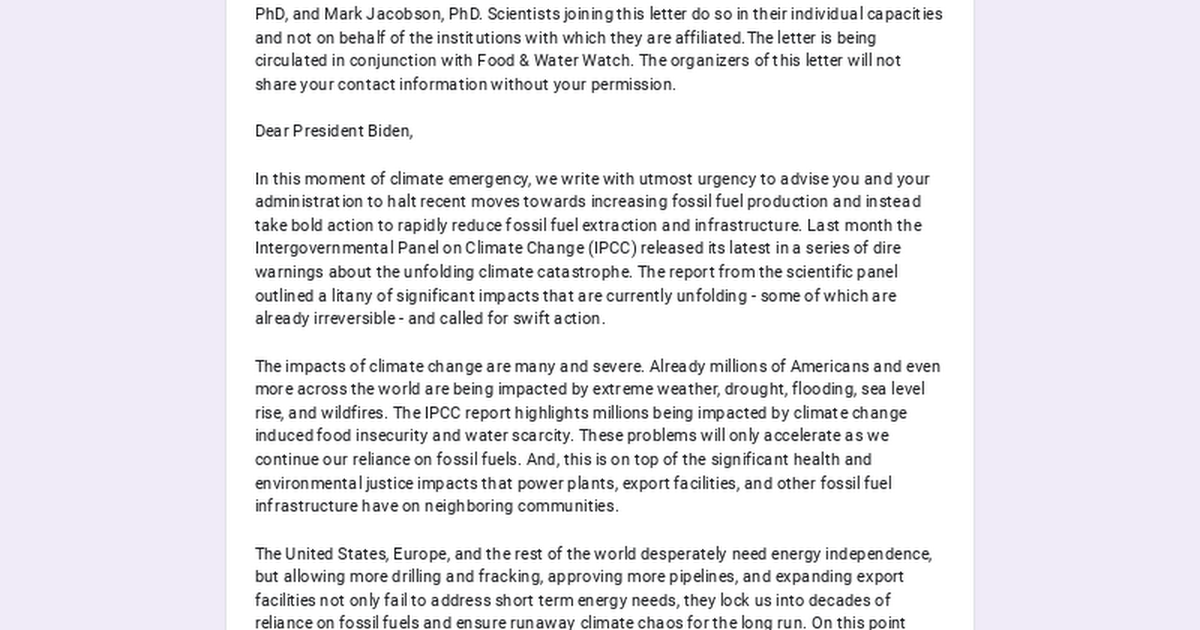 Dear President Biden,In this moment of climate emergency, we write with utmost urgency to advise you and your administration to halt recent moves towards increasing fossil fuel production and instead take bold action to rapidly reduce fossil fuel extraction and infrastructure. Last month the Intergovernmental Panel on Climate Change (IPCC) released its latest in a series of dire warnings about the unfolding climate catastrophe. The report from the scientific panel outlined a litany of significant impacts that are currently unfolding – some of which are already irreversible – and called for swift action.The impacts of climate change are many and severe. Already millions of Americans and even more across the world are being impacted by extreme weather, drought, flooding, sea level rise, and wildfires. The IPCC report highlights millions being impacted by climate change induced food insecurity and water scarcity. These problems will only accelerate as we continue our reliance on fossil fuels. And, this is on top of the significant health and environmental justice impacts that power plants, export facilities, and other fossil fuel infrastructure have on neighboring communities.The United States, Europe, and the rest of the world desperately need energy independence, but allowing more drilling and fracking, approving more pipelines, and expanding export facilities not only fail to address short term energy needs, they lock us into decades of reliance on fossil fuels and ensure runaway climate chaos for the long run. On this point consider what fossil fuel executives are saying – Enbridge president and CEO Al Monaco, for example, recently told investors and analysts that he sees “conventional energy [growing] at least through 2035.” This is a recipe for disaster. The only real path towards energy independence is through renewable energy. As the IPCC report indicated, the scientific evidence is overwhelming that we must act now – we simply do not have time to waste. We cannot afford to approve billions of dollars for new fossil fuel projects and allow thousands of new wells to be permitted. As the IPCC report stated, “the cumulative scientific evidence is unequivocal: Climate change is a threat to human well-being and planetary health. Any further delay in concerted anticipatory global action on adaptation and mitigation will miss a brief and rapidly closing window of opportunity to secure a liveable and sustainable future for all.”Energy Secretary Jennnifer Granholm recently said “we are on war footing” in calling for increased oil and gas production. This is backwards thinking. Instead of fossil fuels, we must apply that level of urgency to building a renewable energy economy. Rather than working to increase oil and gas production, we urge you to use your executive authority to redirect these massive investments, mobilize the country, and rally the global community around a program of energy security through a rapid transition from fossil fuels to renewable energy. President Biden, you ran for office promising to listen to science. As scientists who look at data every day, we implore you to keep this promise and listen to what the scientific community is saying about fossil fuels and the climate crisis. Do not facilitate more fuel extraction and infrastructure. The impacts of climate change are already significant and we have a very narrow window to avoid runaway climate chaos. We urge you to lead boldly, take on the fossil fuel titans, and rally the country towards a renewable energy future.

“Our obligation as scientists to make sure we fight the good fight and ensure the fruits of science are not monopolized by the powerful and the elite.” –

Source: Arming Scientists and Society for the Climate Crisis – CounterPunch.org

Major changes in society can be accomplished by a fast-emerging, broad-based civic jolt so obvious and persuasive that it overwhelms the entrenched powers. The most urgent job is for people to organize to get Trump and Pence to step aside from their bungling, making-matters-worse mismanagement of the Covid-19 pandemic. The White House should let a More

Source: Trump and Pence – Step Aside for Professional Pandemic Scientists and Managers – CounterPunch.org

“Students have led and we must follow—in defense of the scientific truths our colleagues have discovered over the decades, and of the planet we love.”

Source: ‘Students Have Led and We Must Follow’: Thousands of Scientists From 40 Nations Join Global Climate Strike | Common Dreams News