By David Apgar In contrast to Putin, President Xi at least seems focused on the long game for his country. But why is Xi then supporting Putin’s win-today, lose-thereafter venture?

Source: China’s Curious Choice to Stand with Russia – The Globalist

Chinese communism, or rather, pseudo-communism represents the Stalinist destruction of the Marxist hopes for a socialist/communist social transformation. We cannot turn away from the reality of the abortion of the legacy which should have passed away in 1989 along with the Soviet equal abortion.
We have tried here to start over completely with a new model and terminology in a complete break with the Marxist tradition in its path to Stalinism and the Chinese version which now is empowered with its basically capitalist character mixing all the faults of Stalinism with those of capitalism.

We need failsafed terminology: we cannot use the terms socialism/communism alone anymore: they must be completed terms in at least a four-term system of some kind: our DMNC, or ‘democratic market neo-communism’ demands at least four qualifiers without which the term ‘communism’ is derelict: a democratic foundation, an economic set of socialist markets, a legally defined Commons independent of the state system, a new form in parallel of planning, and clearly defined legal, economic, and political rights, failsafed revolution without gulags, secret police, revolutionary marshals and observers, etc… By this standard China is NOT a communism at all but a deviation into monstrosity.
We need to be on guard because Chinese means to make its definitions global and enforced by fascist domination. We can be done with the sinicization of Marxism, because we done with Marxism, with intent to start over and do it rieght. 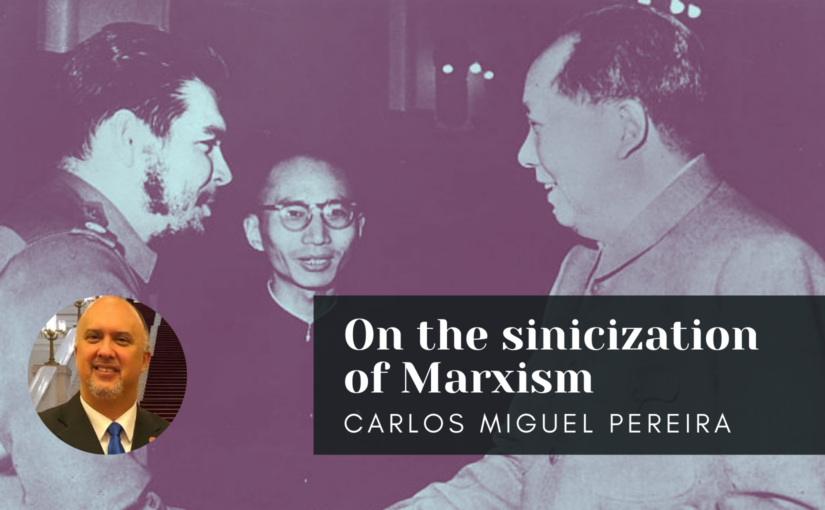 We are very pleased to publish (for the first time in English) this detailed and insightful article by Carlos Miguel Pereira Hernández, Cuba’s ambassador to China. Comrade Pereira delves into the meaning of Socialism with Chinese Characteristics, carefully noting that it should be understood on its own terms, rather than being compared against a one-size-fits-all … Continue reading On the sinicization of Marxism

Source: On the sinicization of Marxism – Friends of Socialist China

The project’s heavy automation ideally means it will be completed faster and with fewer errors than human labor would allow.

Source: A 590-Foot-Tall Dam in China Will Be Built Entirely by Robots

The government is trying to rein in the competitive excesses of market capitalism.

Source: The Larger Meaning of China’s Crackdown on School Tutoring | The New Yorker

While hardly a fan of US imperialism, a new world order from Russia and China doesn’t sound promising and given the behavior of Russia in Ukraine downright scary.

President Biden reportedly warned Chinese President Xi Jinping via video call Friday that China would face “consequences” if it provided material support to Russia amid the war in Ukraine. The call was part of U.S. efforts to minimize an emerging Sino-Russian alliance, which threatens U.S. influence over the Eurasian landmass, says Alfred McCoy, professor of history at the University of Wisconsin-Madison. As U.S. global power declines, China and Russia “are going to emerge as the new centers of global power on the planet,” he adds.

In this important article, originally published as an op-ed piece in the Washington Post, Qin Gang, China’s Ambassador to the US and one of his country’s most skilled and experienced diplomats, sets out Beijing’s principled position on the conflict between Russia and Ukraine for the American public and refutes a number of misconceptions being spread … Continue reading Ambassador Qin Gang: Where China stands regarding Ukraine

The Chinese model persisted where Russian bolshevism failed because it stumbled into our DMNC universe where the place of ‘markets’ in a communist system, which had never been properly analyzed in classic Marxism, was taken in a different way. Unfortunately, the result is a corrupted hybrid that embedded capitalism inside a fake communism with no democratic potential. But the Chinese saw that the capitalist market nexus was not the same as the more general issue of markets. China is really a neoliberal ‘ communist’ fake inside the capitalist world system. But they saw or allowed themselves to act in seeming contradiction to the classic and misleading legacy.
In our DMNC model we can allow ‘socialist markets’ inside a larger system of a Commons of expropriated capitals. These markets are not however capitalist invasions of global capital but entities connected to a Commons: there is thus a completely ignored middle terra incognita where a nexus of markets operating inside a system of (neo-) communist macroeconomy (and planning as a parallel universe. Such a system can stop in its tracks the virtually neo-colonialist entanglement of the Chinese version with global capital.

The history of the country’s relationship with the market is filled with conflicting narratives.

Source: China Between Communism and Capitalism | The Nation