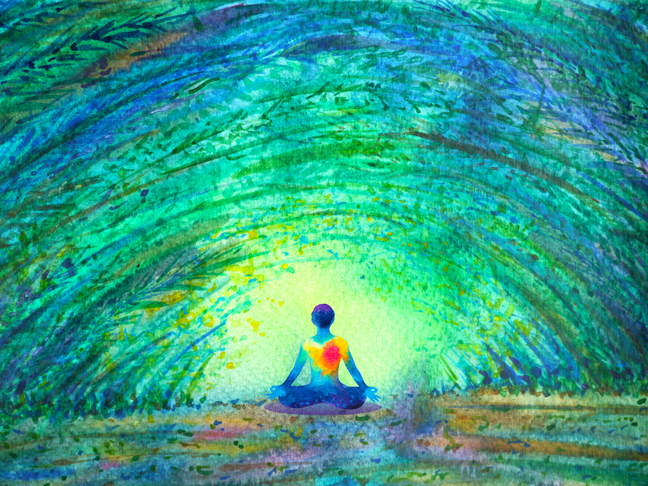 (update at end)
I was about to critique this site as more of the mindfulness confusion only to discover it had (in ten sections, or webpages) its own such critique with links to Buddhist sites, Pema Chodron and much else.

———
In any case the mindfulness realm is full of confusion due to many reasons,

among them the influence of scientism on psychology which is mostly incapable of correctly grasping anything especially psychology, and that dire muddle capitalism which has found a market in this field and turned the subject into the mindfulness racket. To be fair, that is due also to the new age gurus starting with Maharishi and his Transcendental Meditation which I feel forced to denounce as  a racket save only that I signed up in 1972 or so, paid my money and got my mantra. At the first attempt I reached a state of enlightenment that lasted for three days until it faded away. I never had that experience again doing Tm, and I quit and gave away my mantra (SHRING), and much later realized that it was a transient satori of some kind that was triggered several times by completely different subjects including a book on Kabbala, and then J.G. Bennett’s The Dramatic Universe Vol 1. And then entering the world of gurus and sufis the experience permanently disappeared and so I became suspicious and moved on from gurus, some of whom are thieves of baraka, a state I experienced until it was stolen by a rogue sufi. Baraka is remarkable, better than dope, no meditation needed, but I realized it was a material substance of some mysterious kind and trafficked by sufis. So I guess that was cutting through spiritual materialism, that free advice from the notorious buddhist drunk Chogyam Trunga, a mere Boddhisattwa (Buddhist riffraff).  So my advice is beware of spiritual drunks. And Gurdjieff maniac Bennett’s strange book. Am I enlightened? A trick question with no yes or no answer. State 4 is sometimes accompanied with awareness doing. I have never had that experience.  Are Mahayana and Christianity junk religions? Why did Hinayana and Mahayana end in violent religious war?

The problem with much mindfulness is no problem at all if you actually study a text on raja yoga and its discussion of dharana, dhyana, samadhi (concentration, contemplation, ??).  Mindfulness is really in the foothills of concentration, which takes many years (or lives) and after the quick intro aware state like a gift of nature of beginner’s luck. Start young. And keep at it. Meditation is very stressful. Final question: is the demon Mara for real? To stop meditating, reach ‘enlightenment’.

I have learned my lesson, stay away from gurus, and rogue sufis.  Students of mindfulness will get no good advice from me except that that if you meet the Buddha on the road don’t kill him but make faces at him and tell people Buddha was a buddhist sourpuss, the first noble truth and all that.

A gentle yet excuse-busting guide to starting a meditation practice that works for you. Even if that means squeezing in a mindfulness break in the car.

Update: The critique of Mahayana was a gesture of deliberate dialectic. Don’t tell the Dalai Lama I said that. Mahayana is a considerable historical phenomenon indeed and deserves careful study. And in a way the statement should indeed be dialectically challenged. But the statement has importance for the future perhaps because the realm of the Boddhisattwa versus the Buddhas is complex mystery that can befuddle many. In part note the parallelism with savior religion in Mahayana and a savior religion suddenly appearing in the West. Not a coincidence. A study of the eonic effect unlocks a strange clue: Budddhism gestates in a transition, while Mahayana appears later in the ‘free agency’ phase, with Buddhism a little of both. What on earth does that mean? Perhaps in another discussion. In fact the eonic model is a flimsy yet profound tool, but we must dig deeper to unlock its meaning here. It gets too complicated and we can easily misapply the eonic model, beyond its automatic hint. To be continued. In fact, we/I don’t really understand this complex history. We have a lot of posts here on Buddhism and one attempt to explain Mahayana: https://redfortyeight.com/2022/07/16/the-eonic-model-the-divide-and-the-spectacular-correlations-of-israelitism-jainism-buddhism-the-gurdjieff-con/

But the point is that Buddhism suddenly spawned a ridiculously simple problem (shared by HInduism but to a lesser extent given its vastness and multiplicity of yogis), or catch: all its key figures disappear from history. Mahayana appears fairly quickly to create a reserve army of Boddhisatwas in what is really a quite different religion, one that will conserve its exemplars. This is partly guesswork and we don’t know very much about the larger space of civilization and its dimensional complexity. But it is clear that the problem with disappearing Buddhas found its solution.
Note in passing that our macrohistorical model has its fingers in many pies, among them religion. Budddhism is apparently just on the boundary of a transition and has larger dimension unseen by Gautama, although he sensed it: Buddhism is thus both an eonic process and a human creation by an enlightened figure. This has been going on since the Neolithic with the legacy of Hindusism (and no doubt other sources and parallels, e.g. Daoism, etc…)
Note also how far off Marxism and historical materialism are from even an inkling of any of this.

Note also how far off Marxism and historical materialism are from even an inkling of any of this. The issue of Christianity here is not clear and we know very little about its early start. It is very doubtful if Christianity now has any effect on reincarnation cycles.

It is clear that secular humanism, and the versions of it in Marx and his period, is very inadequate to the task of debriefing religion and has created a very strange concoction claiming the mantle of modernity. But does anyone really understand modernity? We barely study its roots. Consider Buddhism: the modern transition in the vast dialectic of its multiple aspects clearly seeds a protocol of Buddhism in the philosopher Schopenhauer (and others) for the modern period. But Schopenhauer is beyond the pale for the ‘secular humanist’ half-idiot. And this raises the issue of transcendental idealism ( very bad term) and its connection to both physics and the history of religion.

I am not a Buddhist and would assess that Buddhism is not likely to survive far into the new modern era. The eonic model suggests this with most religions. But that model makes no predictions and the case of Hinduism is an exception, what happens with Buddhism is not clear. But Buddhism hides a dirty secret according to the neo-buddhist Rajneesh who charged Buddhists (hidden factions, tremendously unfair to the majority) with creating fascism and the hidden elements of Nazism,  A hoard of deadly occultists. An extraordinary charge indeed. Buddhism can hardly survive such a expose. Perhaps the Sangha was committing suicide in a deadly war against the modern era.