Keeping americans in line: we won’t get an apology for the Zionist mafia, Israeli crimes against humanity, and the jewish lobby’s destruction of American democracy…

We had a post a while back on the issue of Christianity, next to the obscure Judaism, and their slow but steady passing away, and seeming downfall into ‘evil’, speaking of American Protestantism. As a secular humanist, I don’t believe in the ‘devil’, but I can take up a bit of Tillich: The concept of the demonic in the thought of Paul Tillich and its root in J. Boehme, F.W. Schelling and the Lutheran mysticism, or better yet students of ceremonial magic and other demonic subjects, e.g. Aleister Crowley, the magickal psychopath (with a k)…Monotheism was always a cryptic form of ceremonial magic, in some obscure sense, and what happens as you break the rules is a nasty surprise. This is surely a generalizable observation applicable to all, no? perhaps not. Take another example: Buddhist meditators or others who meditate with the aim of enlightenment find themselves beset with the ‘demon Mara’, an illusion of metaphysics, but a strange sense of being behind that metaphysical wall sensing an ominous other.
I can’t close the case except to note that these religions don’t belong to humanity, as such: they have been declared the property of the unseen and the unknown. The collapse of Christianity, and no doubt Judaism, (Islam?) is part of an ‘eonic shift’ (read below) and its fate halfway through the process is a complex mess of pottage/evil…Who knows? But the endgame of evangelical Protestantism and zionist crime shows the whole game entering a ‘dark side’ (as if it wasn’t always that way in some sense) of political blackholehood. Instead of being half in/half out, best to simply walk away. Secular humanists have their problems, and limits, and an often sterile atheism, but they have an element of healthy psyches able to heal.
It is sometimes said that the worst thing about the ‘devil’ is that he makes you believe he doesn’t exist. That’s rubbish, a muddle of the above. There is no ‘devil, but the demonic can be a tricky metaphysical paradox in action. The tide of secularism as to monotheism is inexorable, or so it seems. The question of Judaism is still more obscure: membership in a religion is a question of birth in a social grouping. That’s a blessing until it becomes a curse. There is no secure way to get ‘outside’. Except that there is, a figure such as Einstein found the way. 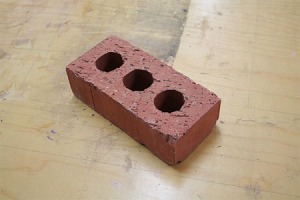 The ‘virtual church of the holy brick’ is a somewhat (deliberately) outlandish concept useful for considering the place of religion in a future socialism, complete with its foundation stone, that holy brick.

To a close look, the history of socialism shows defeat by the issues of religion, monotheism in particular. In part, the fault lies with Marx who created what turned out to be a religion in itself, ‘as it were’. Marx’s debate with Hegel backfired, and in fact Hegel was aware of a dimension to religions lost on Marx. Both should have started with Kant. Marx’s thinking seems reasonable in many ways, but ‘historical materialism’ and dogmatic atheism were doomed to failure from the start, one would think. But his foreboding is borne out. He sensed what we see now as the outcome of complete tolerance. Later critics like Popper cited the failure to create an open society. A key concept but one whose definition is ambiguous, however. Take a hard look at our so-called open society in the US: Between right-wing fundamentalism and the Zionist mafia/Jewish Lobby, the American politician has little religious freedom: he must be a Christian, hypocrite or not. Control by religion has blunted and forever delayed the secular politics promised by Jefferson. To even reference the Jewish Lobby is charged with antisemitism. Freedom of religion is real in general culture and the tide of true secularism proceeds apace. But the US experiment, indicated as secular by Jefferson, has regressed to domination by the two classic monotheisms. And this situation is likely to destroy the great American experiment. Or perhaps not. To a great probability, the classic monotheisms will pass away, but that could take centuries longer. It is important for monotheists to consider the eonic effect: religions almost always pass away in the next age period from the one that is their source, but often a long way into that new age. This fate is almost certainly going to be the case with Judeo-Christianity, or the two taken separately, Judaism, and Christianity. Similar statements apply perhaps to Buddhism and/or Hinduism which is actually likely to do what it always does, recreate itself. Note that the first order of business in the modern transition was the Reformation which played a funny trick here and that ‘Christianity’ as Protestantism is essentially a new religion, probably ensuring its long duration in the modern era. Who knows about any of this?

Our model of a ‘democratic market neocommunism’ won’t really have this problem because being based on the eonic model it becomes a flux of all the classic religions and cultures, ensures liberal rights, etc…Can it create an open society? Surely so, given however the issue of private property as capital and expropriation. Note that no core ‘ism’ is a new belief system in the eonic model, but that seems not the case at first. Thie model does not allow the concept of ‘god’ as an historical dynamic. But that model is not a new belief system as such: it is a form of historical periodization, and points to unknowns: we see the legacy of Israelitism, then two very different outcomes, Judaism and Christianity. They fit into the eonic effect (though Christianity only marginally) but that still demands its own explanation, to come, we hope. We claim Israelitism is like a cargo cult of the eonic effect, but out statements discuss its periodization, its content is in fact not quite known to us.

There were many Christian and Jewish socialists and the left should welcome them into the effort of postcapitalism but must establish its own freedom of belief, too obviously lost in the American politician, what to say of the heavy conditioning of capitalism. Socialism needs a real future but after the fiasco of Bolshevism, that future may be foreclosed. Then again the current right-wing Christianity is starting to take on the core of a fascism, a fatal step in the long run, however its near term. This, and the same may be true of Zionist covert action and crime, will rapidly cause disintegration of these religions, the question of Israel becoming a huge question mark.

Let us make our basic point that our model might redefine or critique the open society concept but will be closer to its realization than even the so-called ‘bourgeois democracy’ bound up in capitalism. Kantian ethical socialism shows a brilliant solution to the whole range of issues. But as Hegel stepped beyond Kant he confronted Marx with a treacherous and false duality, materialism versus idealism being one aspect of that.

But a creative future will soon define religion beyond its historical categories and create a more intelligent secular humanism, an ism that in many ways has delayed a real debriefing of the traditional monotheisms. A virtual church of the holy brick,…

If we show little respect for Judeo-Christianity we should consider the reality of Christianity (beside the hopeless muddle of Judaism) as a cruel totalitarian state cult that used religious terrorism to intimidate and control, promised a salvation based on belief conformity without effort, and which it could not deliver, and a prospect of hell that enforced a belief about a kind of religious concentration camp.
We should note that early Christianity is almost unknown to us and our judgments might be very different. And later Judaism has lost its early profundity as it invoked, not god, but a glyph beyond words, IHVH. The flood of confused godism was its sad legacy instead, and Judaism is a fossil in the end, its claims for Jews with a covenant as a chosen people being later false beliefs based on that early transition in the eonic effect, beliefs obsolete after the early creative phase. The early Israelites were chosen because they became a focal point in an eonic transition, that status defunct at all later periods.